With the announcement of Oracle Cloud Infrastructure Generation 2 from January this year, a number of global customers have moved to this new hyper scalar platform. This includes Zoom, 8X8, McAfee, Altair, SKY, Siemens, GE, Circle K, Texas State Government, and Cern Open Lab amongst others.

Reflecting on the success of Oracle’s Autonomous Services, over the last three years, Larry Ellison, Chief Technical Officer and Chairman of the Board, highlighted, “The difference between a Generation 1 cloud and a Generation 2 cloud is the availability of autonomous services.” 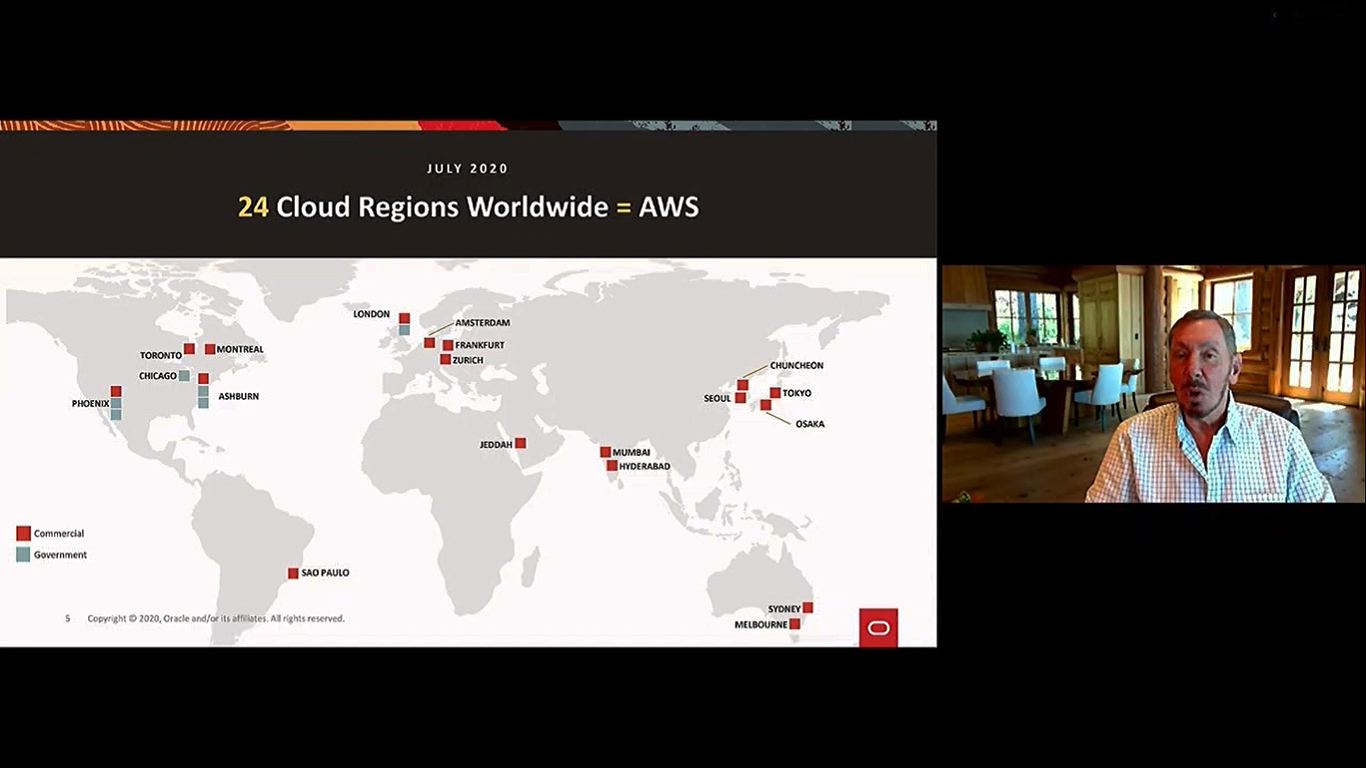 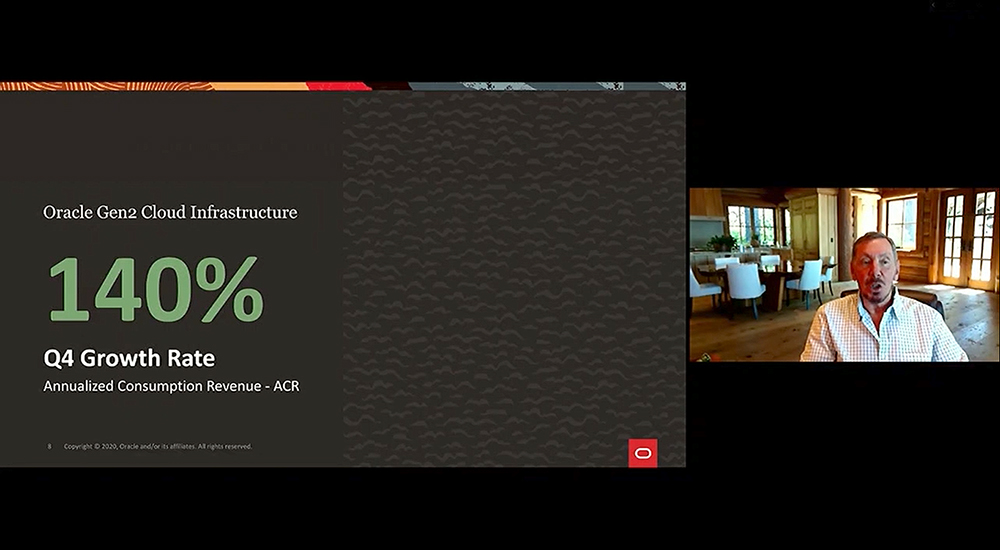 So, what is Oracle’s autonomous game plan?

Encryption security is always on and there is no downtime required for patching. All Oracle databases are patched as soon as it is announced, while the systems are running, and users are not even aware that the applications are being updated. Elastic scaling takes care of increasing and reducing the number of users.

The benefits of an autonomous system are enormous. Human labour is far more expensive than the costs of the IT infrastructure. “But the most important benefit, I believe, is that it eliminates human error,” says Ellison. By eliminating humans from the equation, there are huge benefits in security and preventing data loss. Almost all of the global data losses, have stemmed from human error. “Data losses are impossible in an autonomous system because there are no humans to make mistakes,” adds Ellison. “You cannot make a mistake with the Oracle Autonomous Database. You cannot make mistakes in a 100% automated process.”

The Oracle Autonomous Database requires no human intervention, eliminates the possibility of human error, and thus rules out the possibility of data loss. Moreover, the administrator or creator of Oracle Autonomous Database, can never see the resident data. This makes it one of its kind in the world, prompting Ellison to stress that it is the most secure database in the world.

Ellison points to the 2019 incident of Capital One servers getting breached on AWS cloud due to inadequate switch provisioning. Ellison says the cloud services on AWS like Aurora, Red Shift, Dynamo, and others are manually set up and complex. “All AWS databases require complex manual provisioning.” When human beings are using very complex cloud systems, they can make mistakes, which resulted in the breach of data on Capital One’s hosted server. 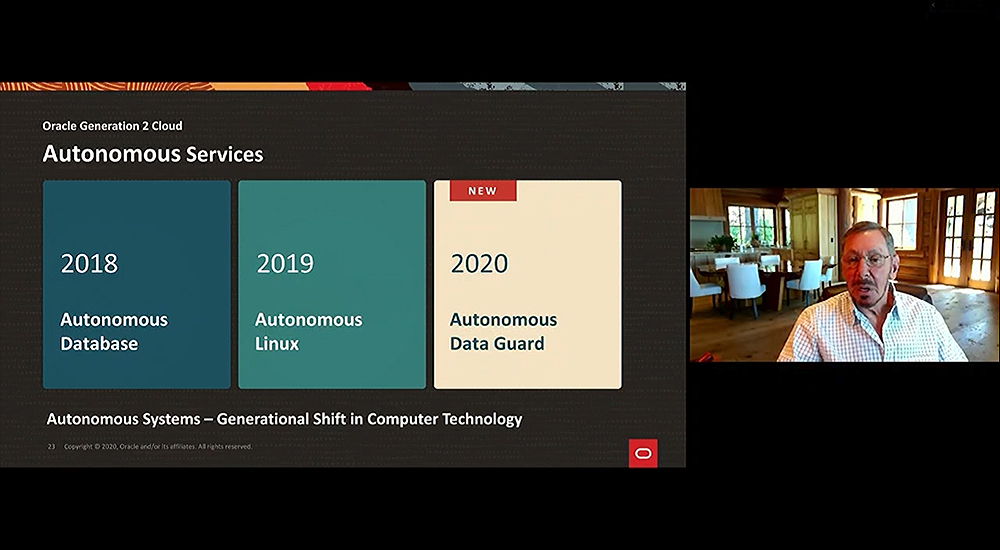 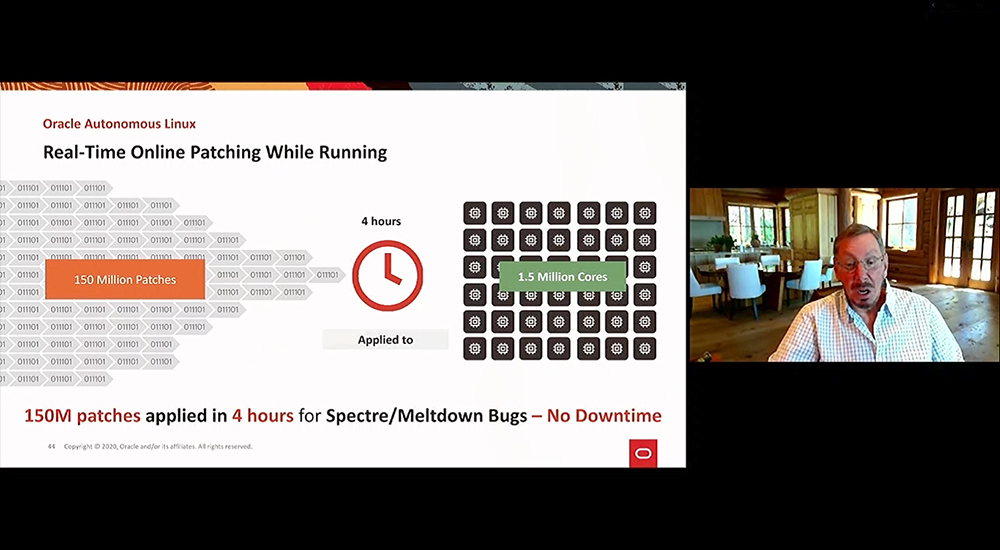 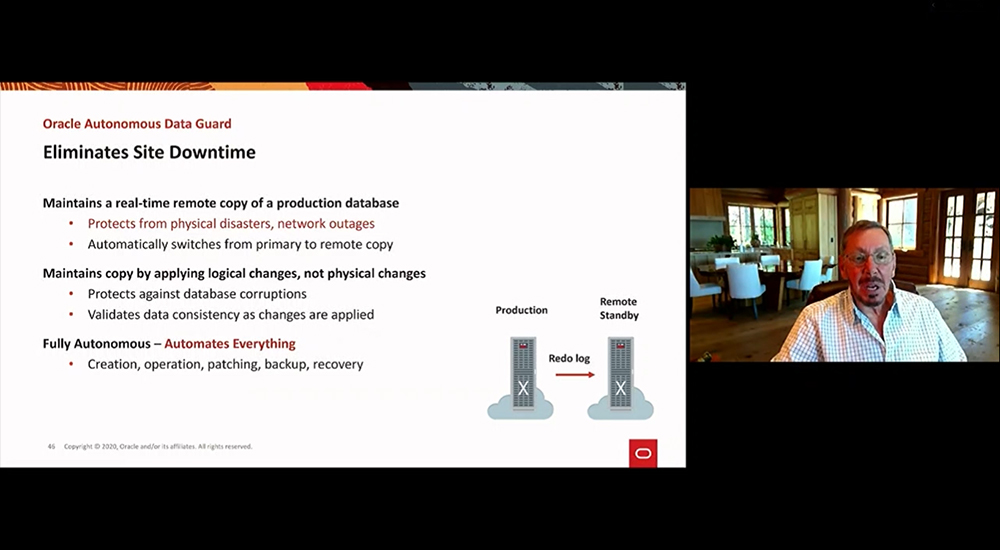 Why run fast in the public cloud? The reason according to Ellison is cost. “Time is money in the public cloud.” If the Oracle database platform is twice as fast as others, then the time spent computing will be half and the billing will also be half. Oracle has now given a guarantee to any AWS customer moving to Oracle Database powered by Oracle Autonomous Database, that the migration will cut their Amazon bill in half.

With a power packed trio of autonomous services, Oracle is beginning to set the high note of innovation, disruption, and transformation in the public, private and hybrid cloud. 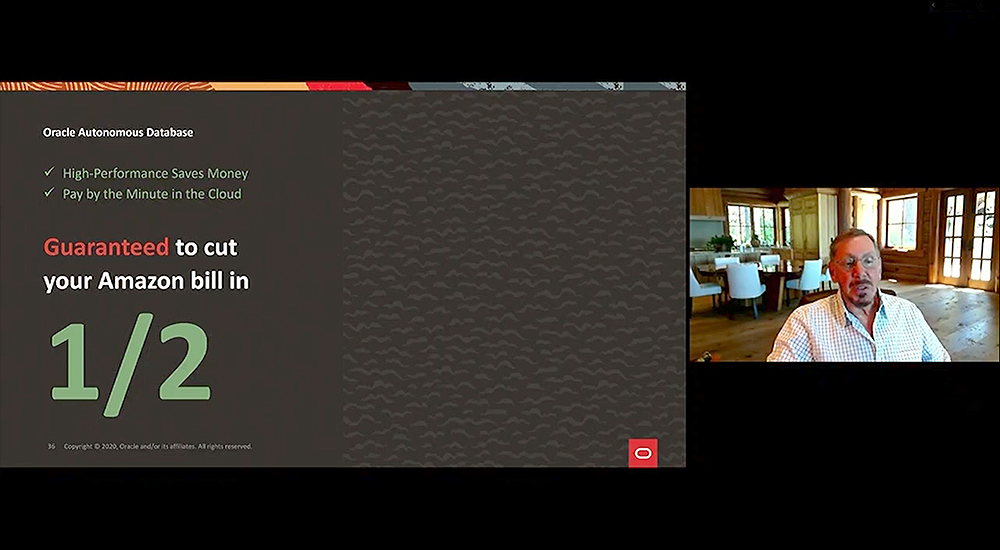 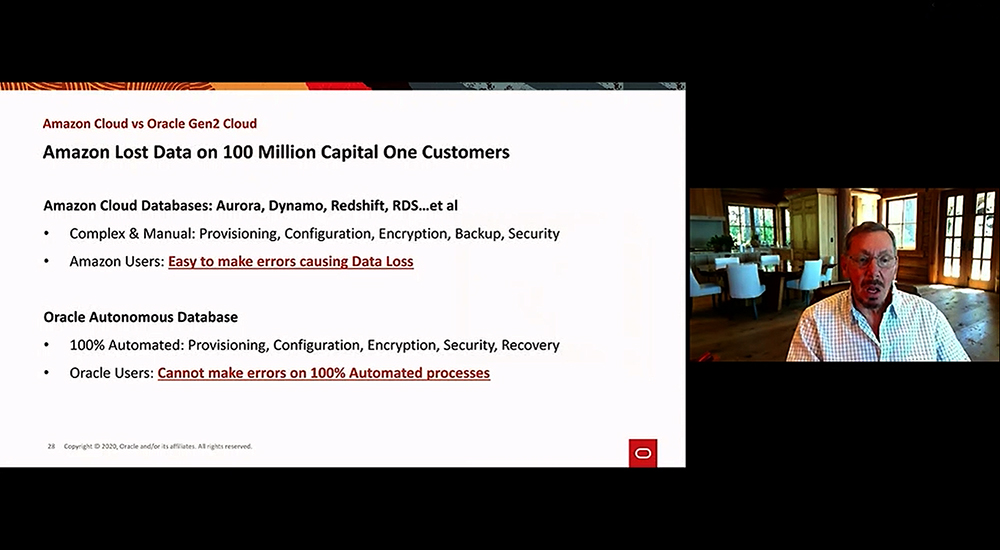 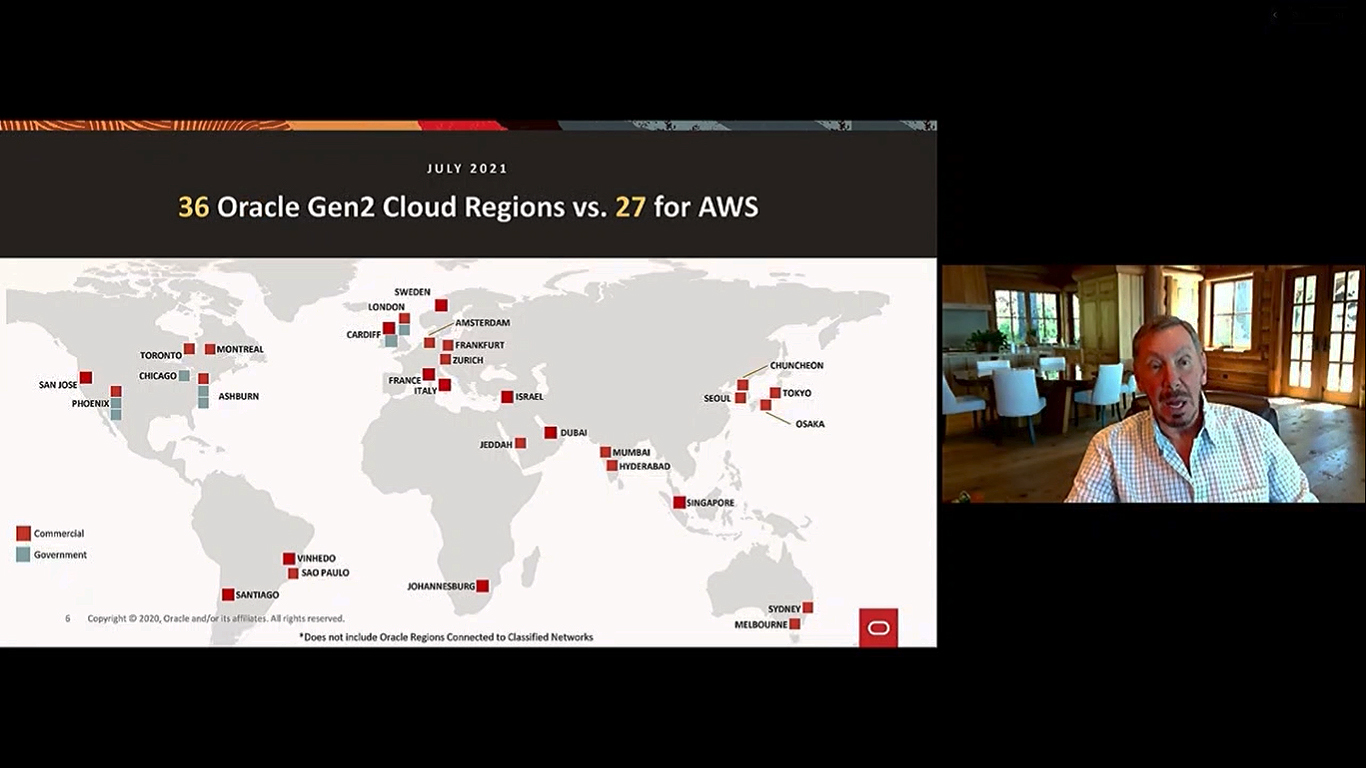 Most enterprises are continuing to run a part of their workloads in on-premises datacenters. This has resulted in demand from customers for a hybrid architecture, where the same services and portability of applications exists between public and on-premises cloud environments. Until today, no solution was able to bridge the gap between cloud and on-premises environments. Typically, on-premises offerings from cloud providers offer a small subset of the services available in public cloud regions. Enterprise customers have been asking for the full experience of a public cloud on-premises, including access to all of Oracle’s cloud services, to run their workloads.

Driven by strong customer demand, Oracle has announced availability of Dedicated Region Cloud@Customer, a fully-managed cloud region with Oracle’s second-generation cloud services, including Autonomous Database and Oracle SaaS applications, within the customers datacenters. The service is priced at $0.5M per month.

Oracle Dedicated Region Cloud@Customer includes full management capabilities and access to new features and functions the moment they become available in Oracle’s public cloud. It provides strong isolation of customer data, including all API operations, which remain local to customer datacenters and provide the highest levels of security.

Enterprises get the same set of modern cloud services, APIs, industry-leading SLAs, superior price-performance, and highest levels of security available from Oracle’s public cloud regions, within their own datacenters. This is well suited for highly regulated or security-sensitive businesses needing to meet latency and data residency requirements.

With Dedicated Region Cloud@Customer, Oracle is delivering public cloud experience into customer datacenters, with no changes in pricing or capabilities. This represents a new direction for public cloud providers, who have offered only limited versions of their services to customer premises. Oracle Dedicated Region Cloud@Customer brings the capabilities of Oracle Cloud Infrastructure and Oracle Fusion SaaS Applications, including over 50 services, on-premises. This brings together public cloud service capability with the compliance, latency and co-location benefits of on premises. This can be a game changer for large scale digital transformation efforts at enterprises.

Building on the success of Oracle’s Exadata Cloud@Customer service over the last three years, Oracle announced the availability of Oracle Autonomous Database on Exadata Cloud@Customer. This combines Oracle Database with Oracle Database platform—Exadata—delivered as a cloud service in customer datacenters. It eliminates database management and capital expenditures while enabling pay-per-use and elastic consumption of database cloud resources. Autonomous Database is available to run in customer data centers both as a standalone offering and as part of Oracle Dedicated Region Cloud@Customer.

Oracle Autonomous Database on Exadata Cloud@Customer is the fastest transition to a cloud model with typical deployments taking less than a week, while data never leaves the customer’s datacenter. This is ideal for enterprises that find it challenging to move their database workloads to the public cloud due to data sovereignty, regulatory requirements, security and performance concerns, or because their on-premises applications and databases are tightly coupled.

Every business has a set of ISV and home grown applications that they depend on to run all aspects of their business. For companies serious about running these types of critical Oracle-based applications in an on-premises enterprise database cloud, Oracle Autonomous Database on Exadata Cloud@Customer is one such offering. Oracle Autonomous Database on Exadata Cloud@Customer reduces customers’ infrastructure and database management by up to 90% because they only have to focus on the schemas and data inside their databases, not on running the underlying database infrastructure. 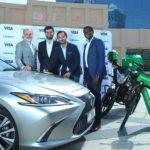 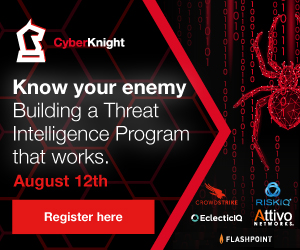